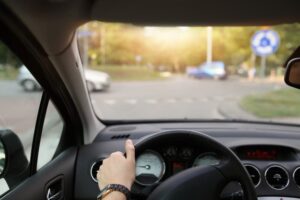 Drivers must obey specific traffic laws when entering roundabouts and traffic circles in Baltimore, but some motorists don’t know the laws or fail to follow the rules. Drivers who behave recklessly or negligently in traffic circles can cause severe accidents. When they do, they can be held responsible for the consequences.

At the law firm of Cohen & Dwin, P.A., our attorneys can help you identify all possible sources of compensation for your injuries and related losses stemming from a traffic-circle accident in Baltimore. For over 40 years, our team has advocated for the rights of injury victims in Baltimore and across Maryland.

Contact our roundabout and traffic circle accident lawyers in Baltimore today for a free initial consultation.

What Is a Traffic Circle or Roundabout?

A traffic circle or roundabout is a type of intersection shaped like a circle. A roundabout is usually a smaller, tighter loop than a traffic circle. Small roundabouts are popular in the United States because their design forces motorists to slow down before entering, which helps protect road users in the roundabout.

When a driver approaches a roundabout or traffic circle, they must enter the circle by turning right and continuing in a counterclockwise direction. Drivers entering the roundabout must yield the right-of-way to traffic already in the loop. The roundabout shape and the slow speed of circling traffic should compel approaching motorists to reduce their speed, watch out for others, and maneuver smoothly into and around the circle.

Despite their advantages, roundabouts and traffic circles can still be the site of severe car crashes.

The same traffic laws that apply at other intersections generally apply at roundabouts and traffic circles. The Maryland Department of Transportation offers the following rules to remember for drivers who use traffic circles in the state:

Common Causes of Traffic Accidents at Roundabouts in Baltimore

Although they are generally safer than other intersections, accidents can still occur in traffic circles and roundabouts. Some of the most common causes include:

What Factors May Determine Negligence in a Roundabout Crash?

If you were injured in a roundabout car accident in Maryland that was not your fault, you have the right to seek compensation from any parties whose reckless, negligent, or wrongful behaviors contributed to the wreck. Investigators looking to determine who is at fault for a roundabout crash typically consider factors like:

Who May Be Liable for an Accident in a Roundabout?

Depending on the circumstances, any of the following examples could be liable for a roundabout accident:

How to Navigate Around a Traffic Circle Safely

If you feel uncertain about navigating roundabouts or traffic circles safely, consider the following driving tips:

Talk to Our Traffic Circle Crash Lawyers About Your Claim Today